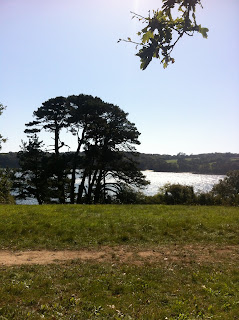 When you look at this picture you might wonder why I want to leave Cornwall but as we all know, it's really important to recharge our batteries from time to time. I had hoped to do a recce for my novel, the end of which is set in France, but on receiving an unenthusiastic response from the friend I was hoping to go with, I tackled my French group. Well, I say 'group', but there are three of us in the intermediate group and that's including our lovely friend and teacher.

They said YES! And while we aren't going down to Pays de la Loire, which is the area I want to recce, we are going to Roscoff courtesy of Brittany Ferries leaving on Thursday - overnight crossing from Plymouth to Roscoff, arriving at 8am Friday morning. We have two and a half days there before returning on Sunday afternoon.

We booked it about a month ago, on receipt of an email offering 25% off ferry charges, and there we sat, crouched round my computer with a glass of wine each. The excitement was quite something - while I haven't had a holiday this year, you'd think that none of us had ever been abroad before!

Just to compound matters, it looks like the forecast is rain. And rain. And possibly high winds (ferry could be interesting) which wasn't something we'd considered, having had a long spell of dryish weather. But we have three days in Roscoff to explore, speak French and have a huge amount of fun.

I am now kitted out with a waterproof coat (all mine are from car boot sales and leak like sieves) and another friend has lent me waterproof boots. I'm also taking my waterproof trousers so I might not look tres chic, but at least I will be dry.

Moll is going to a dear friend in Penryn for a little holiday of her own, and I'm sure our reunion on Sunday night will be worth recording. 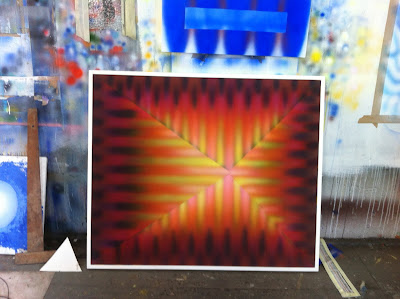 Barrie Cook's amazing paintings don't come across in photographs nearly as well as they do in the flesh, but I was fortunate enough to meet this man on Wednesday. I am featuring him in my new book, WALKS IN THE FOOTSTEPS OF CORNISH ARTISTS, and a kinder, lovelier man I have yet to meet.

And his talent - he has been spray painting (mostly) since the 1960s and is still working now, at the age of 90. Despite a track of ill health - including a lot of major surgery - he has retained his sense of humour, has no sense of ego and is refreshingly down to earth and unpretentious about the Art World.

Jac, Daisy, Mollie Dog and I did a walk round Ruan Minor (where his studio is), Cadgwith and Poltesco last weekend, in glorious weather, as a tribute to this wonderful artist - and Cornwall was looking at her very best. 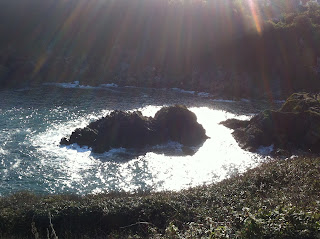 On a more sombre note, poor Moll had the long awaited heart scans - ECG, ultrasound etc - on Tuesday - and I don't know who was more upset, me or her. As I hadn't expected them to do them on the spot, neither of us were prepared (probably just as well) but I felt terrible leaving her there, and apparently she made her displeasure known. (I pity those vets sometimes.)

Thankfully the lovely heart specialist rang later to say the results are OK - her heart isn't enlarged to any degree though that could be the meds she's on, and to keep her active and on the meds. I have to monitor her breathing carefully - I've got a chart to do this with - and to notify them if any changes at once. I won't go into the details of what could happen if and when her condition disintegrates, but basically she could well die the same way as darling Pip died, and I couldn't bear that. So they will do everything they can to prevent that.

So you can imagine how I felt. And it's one of those times being on your own is really hard. I kept busy at work, had meeting, then had a swim, and finally was able to pick her up. But the poor girl was so woozy and wouldn't let me pick her up, was obviously really disorientated and frightened I would imagine. I got her home and she couldn't settle - staggered from lying under the bed to behind the sofa and swore at me, growling ferociously. My god was I in her bad books.

I'm glad to say that by evening she was obviously feeling better as she had some food and cuddled up to me in bed and all was forgiven. But boy did I miss Pip then.
I am happy to report that she is back to her normal bolshie self, and hope she will continue to be for a long while... 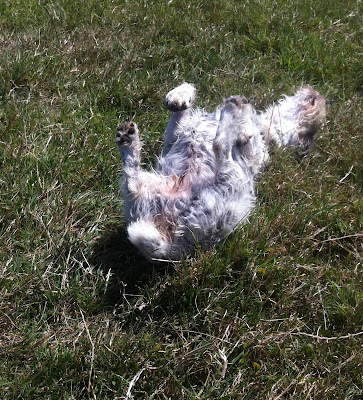 Posted by Flowerpot at 10:04 No comments: 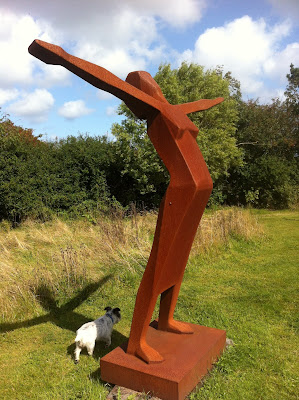 This is me (and Moll of course) doing our morning yoga...

It's not quite, though a better place to practise yoga I can't imagine. Having a lull work wise while I wait for my novel to come back from being read through, and a lull in work (worrying but not much I can do about it), I decided that, having signed a contract for Book Six, I'd better get on with it. So last week Heather and Moll and I set off for Coverack to do first walk for my new book, centred round Terence Coventry's sculpture park.

I first came across it about 8 years ago - literally stumbled across it, being set in meadows a mile or so from Coverack. And what a find - the most superb sculptures made by an ex-farmer whose first exhibition in London was at the age of 71. I interviewed him several times and was struck by how vital, focused and driven he was - and utterly his own man, creating work for himself, not driven by the dictates of some London art gallery.

His sculptures are big, some huge, and all inspired by animals, birds and the landscape that surrounded him. Here are a few. 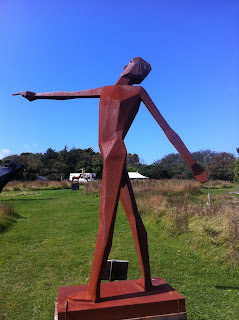 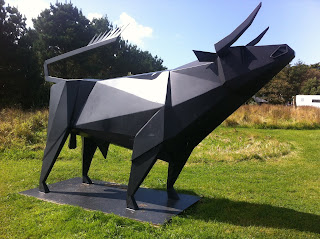 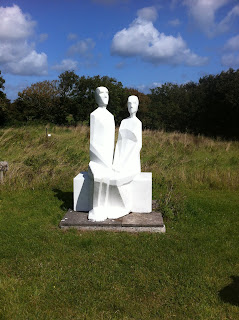 It was a real joy and privilege to meet Terence, who sadly died a few years ago. I only hope they preserve his park as a place where one and all can enjoy his wonderful work.
Posted by Flowerpot at 17:17 No comments: