Or is that best laid plans?

It's not often that I plan ahead, but there have been two events in November that I have been looking forward to for months.

The first was Matthew Bourne's new version of Cinderella. I am a huge fan of his and seen almost all his ballets as a) my mum is also a fan and treats me for birthday/Christmas and b) he premieres his shows in Plymouth which means I can get up there by train for the day.

The second event was seeing my oldest friend, Lin, who is over from Australia (where she has been living for some 30 years). I'd got the whole weekend organised – Friday interview in Callington on the way up, stay with my mum, ballet on Saturday, see friends on Sunday and Lin on Monday. And then Pip got poorly and that scuppered that.

Never mind, we'll go for Plan B, I thought, being a great believer in Plan B. So I did the interview by phone. Sadly I couldn't find anyone to look after Mollie for the day so I could go to the ballet, but in fact I got the most horrendous fluey cold and felt so ill that frankly getting out of bed was a major achievement, so I'm now hoping to see the ballet next year in Bristol.

As for Lin – she was hoping to drive down for lunch this week. But they've been roaring round and just got back from London, she needs to spend time with her family and she goes back on Friday so sadly it isn't going to be possible. And for once in my life I can't see a Plan B, let alone C. And it will be another couple of years before I see her again.

But the best news is that she is engaged. I haven't (obviously) met him but if he makes her happy – which he does, very much – and they love each other – which they evidently do – then that's good enough for me. And even if I can't be there for the wedding I shall be there in spirit. So here's to them – three cheers and may they have a long and happy marriage!
Posted by Flowerpot at 09:42 18 comments: 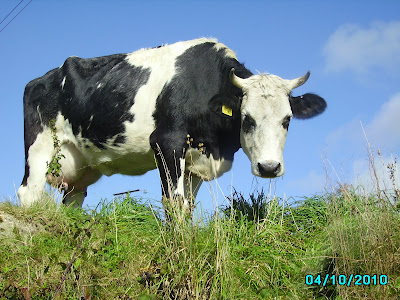 This picture has absolutely nothing to do with the post, but was taken after a walk in Penwith - I was convinced the cow was going to land up on top of the car!

Many thanks for all your kind thoughts and wishes which mean a great deal.
Himself is making progress but it's going to be a long old slog – they reckon he will be in hospital for probably another 4 weeks (though he insists it won't be that long).

It is heartening to see him improve, and fingers crossed that will continue apace. The care that he is receiving is wonderful: the nurses couldn't do more and the consultants have also been terrific. Hearing that 25,000 frontline jobs are to go in the government cuts makes my blood boil – those poor nurses are rushed off their feet as it is. And how can those jobs possibly go without affecting patient care? Stick a politician in A&E or the Medical Admissions Ward for a day or two and they'd soon revise that bright idea....

At first, living by myself, after 14 years, was one hell of a shock. I'm not used to cooking for starters as Himself took over that chore years ago. Luckily, seeing my increasingly baggy trousers, friends dropped round food parcels which kept me going until I remembered how to actually make a meal again. Oh, and eat it. My dear brother in law has checked the van over for me and brought me a huge bag of kindling as well as generally being there for me over practical matters which makes a huge difference. I seem to spend my whole time thanking people...

But I am adjusting to being sort-of-single – Mollie and work both enforces a morning routine and the afternoons are taken up with visiting Pip most days and walking Mollie. I see friends for dog walks or in the evenings if I have the time and energy but have found to my surprise that most evenings I am content curling up in front of the fire with Molls, a glass of wine and a good book or the telly. Who wants to go out in this weather?

BUT something terrible happened recently. Downton Abbey is no more. What on earth are we going to do on Sundays now?
Posted by Flowerpot at 09:49 21 comments:

Poor Himself is currently ensconced in Treliske hospital, having become very poorly over the weekend. I feel very strange, as if I'm living in some parallel universe ruled by doctors and nurses speaking in a language I don't understand. My husband has seeped away, and is replaced by an old, frail man.

It's difficult to keep sane at the moment. But I know I must keep doing the things I always do – work and walking Mollie – and my friends have been so wonderful and supportive. Several have provided food so I don't have to cook (eating is difficult when your stomach is constantly lurching as if on a cross channel ferry) and sleep is a bit hard to come by.

But I know he's in the best place and just hope that he responds to his treatment very soon. Keep your fingers crossed.
Posted by Flowerpot at 10:06 31 comments: 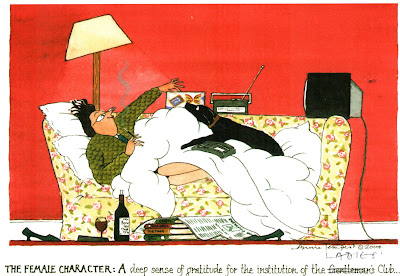 My mum sent this card to Himself and comes from an amazing collection called, appropriately, Tottering. Give the reclining figure a beard and substitute the labrador for a scruffy Jack and you have a true indication of The Sick Bed.

Many thanks for all your good wishes. He is improving, albeit very slowly which is good news. I'm shattered but nothing that a bit of rest won't cure.

But it's a big day for Himself - a Big One. Rather too big for us to mention in fact.

He has managed to haul himself out of The Sick Bed and, weather permitting, we will go and have a drive somewhere in the sunshine – or that's the plan. Then a quiet night in with a DVD.

Reading this makes me laugh. His other 14 birthdays since I've known him have all been somewhat energetically enjoyed in the pub and then with more liquid refreshment at home. Every year he says he doesn't want to do anything, and every year I secretly phone a few friends and we agree to meet in the pub – just for an hour or so. And every year he thoroughly enjoys himself.

This year will be a more sober affair, as we're postponing celebrations until he feels better. But as a friend said in an email today, he has turned very chic. My husband has been called many things in his life but chic is not one of them. It came about like this.

He has decided, since the GP said that he could drink alcohol if he wanted, to try vermouth. (The antibiotics seem to have done something to his taste buds so he no longer enjoys wine, beer or coffee.) So for the last few nights, as his health improves, he's been sitting up in bed, with a glass of vermouth to hand.

So picture us on the eve of his birthday, settled on The Sick Bed. Himself and I lying in (or on my case on) the bed, Mollie sprawled luxuriously over the duvet, watching telly with a glass of vermouth to hand.

I should add that Himself has the glass of vermouth, not Mollie.