A day on the ocean wave 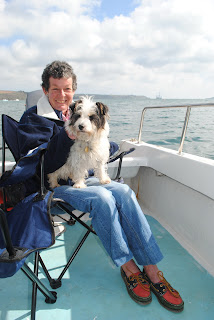 I nearly bought a boat the other weekend. We spied one tucked down a little creek near Porth Navas, which would have been perfect. Sadly the owners wanted a lot more than I was prepared to pay for it. Still, it was a nice dream, and something to work towards. Maybe go halves on a boat? Let’s see what happens.

It was a gorgeously sunny day on Saturday so we headed out on the boat and had a fabulous day. There’s something so special about being out on the water that is, as Mr B said, almost as relaxing as being asleep. I think it’s because you can tune out and get away from everyday problems: the only sounds are the gentle chug of the engine, the lap of the waves, and endless little things to observe that you wouldn’t have time to notice otherwise.

A heron or egret standing shyly on the river bank.

Cormorants – three of them – drying their wings on a large buoy, heads tilted to show their best profiles. 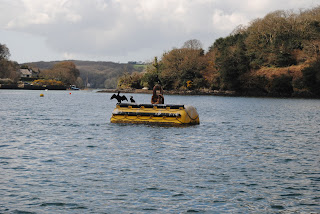 Dark, hidden caves, only visible from the sea.

Moll standing on her hind legs, ears flying back, looking at the water rushing by.

Our smiling, salt spattered faces.
We made the most of the day as there will be a short break from boating for a few weeks. Then, weather permitting, lots more. We hope.

Roofing and other trials 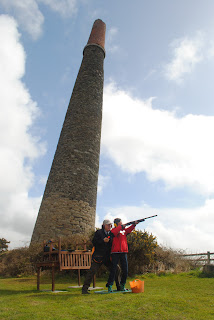 Life continues to be busy, as ever. Most pressing of all is trying to sort a new roof. (She says casually.) Over the last few weeks we’ve had gale force south easterly winds which, on Bank Holiday Monday, nearly ripped the flat roof off my house and the two next door. Luckily Mr B and Joe leapt up there like mountain goats and secured it with a plank and bags of cement (no mean feat in winds so strong they could hardly stand up), and the next day Tony came and secured it with battens. Since then I’ve been getting quotes and we’d got it all sorted when one of the other landlords put a spanner in the works on Monday night.

So my blood pressure has been a little high over the last few days. Thankfully I’m able to let off steam but I shall be glad when the next hurdle is crossed.

On a brighter note, we had an interesting time clay pigeon shooting last week (see above). To my chagrin, I didn’t hit a single clay but neither did Mr B which mollified me a little. We then went on to Godrevy to pick mussels. Well, we didn’t actually because the rock we had in mind was under water when we got there (and yes, I had checked low tide) but we had a good recce and earmarked it for next time (always good to have an excuse to go to Godrevy).

And while we may not have got any mussels, we went round the corner and saw a cove full of seals – about 50 of them – all sunbathing on the beach. Now that was a sight I will never forget. (But as I didn’t have the camera, you will just have to imagine it.) 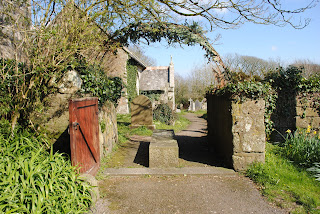 The church at Sancreed - to prove that we have had a bit of Cornish sunshine....

I don’t have an agent for my walks books, but I’m still on the lookout for a publisher and/or agent for my novel, FOUR LEFT FEET (which is being read by an independent publisher at the moment).
As most writers know, getting an agent is an incredibly difficult process, because it’s not just about our writing ability, the book’s marketability and a whole host of other things, but it’s about chemistry. An agent needs to fall in love with your novel and believe in it. And as we all know, falling in love is not something that can happen to order.

So when I was sent an email about Agent Hunter, I read it with interest. Have a look, and this is what my fellow writing friend Emma had to say:-

“I really like the look of this site, Sue. Great to have info about specific agents, much more detailed than the WAYB and much easier to keep up to date I imagine. Knowing which writers specific agents rather than agencies represent is great to know as well, and specifically what kind of work they like. Agents and agencies are changing so much all the time it must be an advantage to have a resource of this kind. Twelve pounds seems pretty reasonable for access to such detailed up to date information and I'd definitely think about signing up. I guess it would be good to know more about how it works in practice (if it is up to date or whether it just seems it) but as it's new it will take a while for people to start getting results.”
So all you writers out there – take a look!

Meanwhile, I’m editing another walk that we did on Friday at Sancreed. Fabulous sunshine although it was very windy. And on Saturday we had our first trip out in the boat, which was wonderful. Tomorrow I’m off to have a lesson in clay pigeon shooting for Cornwall Today, then we’re going to pick mussels at Godrevy. Shame the forecast is so dire…. 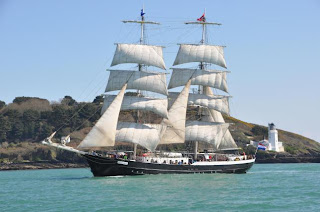 On Easter Monday I had my long awaited Christmas present – a trip on the Dutch brig (tall ship) Mercedes. This was booked at Christmas and I had been in a state of growing excitement ever since, so when I got an email saying that an extra trip had been put on, on Easter Sunday, we decided that we couldn’t pass up this opportunity.

Saturday was lovely – as you can see from the picture by David Barnicoat above. Sunny, enough breeze to put all the sails up, and a good time was had by all. However, I got back on Saturday to find a message saying that our evening trip had been cancelled due to bad weather, but would we like to go on the Sunday day trip? We decided we would and had an early night.

Sunday dawned bitterly cold, with an easterly wind that strips any warmth from the most well padded of bodies. Undeterred, I put on three thermal vests and layered up on top of that, finishing with my duffel coat, woolly hat and thick scarf. Might not have looked too elegant but it did the trick.

It was pretty rough but I did enjoy it – it’s fabulous being out in the bay with three metre waves, on a ship like that, and feeling the whole force of nature with you. Also, I wasn’t at all frightened, which I would have been even probably a year ago. I figured we were in good hands and we wouldn’t have gone out if the skipper had had any qualms about the weather. Still, while I didn’t feel sick, I didn’t feel like eating either which, as my friends know, is most unlike me.

I awoke on Monday morning – the day of my proper Christmas present – filled with foreboding. The easterly wind had become a gale that screeched in and out of the houses, and the waves in the harbour tossed and groaned as if having a terrifying tantrum. The skies were grey and heavy and I wondered what on earth I was doing. I very nearly wimped out, but got a text to the effect that I’d be glad I’d done it. So I thought yes – I will. And after all, it was a very generous present.

Even so, we dropped Moll off at a friend’s and I gave her my brother-in-law’s phone number (he has a key to my house) and the phone number of a friend who would have Moll if anything happened to us. Anna laughed uproariously (I didn’t), and we departed for the docks for the second time. On board we were greeted and treated like family and from then on we had a fabulous time.

It was very rough – the waves were four metres – too rough to go out in the bay. But we had a wonderful sail up and down the Carrick Roads and in the harbour and got a real taste of what it would be like to sail on a tall ship. We got talking to the crew, learned more about their lives and about the ship, and promised to meet up when they come back to Falmouth next year.

Sitting in the pub later, we glowed with wind and salt and exercise, and planned doing a sailing course – when the weather’s warmer. It was the most fabulous day, and one I know I will never forget.