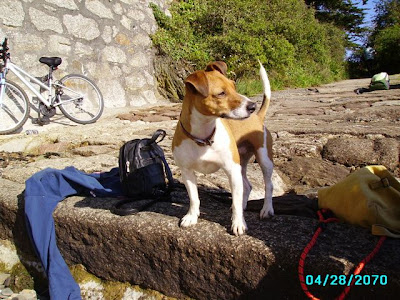 I promise a real blog soon - been somewhat hectic on the work front recently. In the interim, the picture is of Titch, Mollie's very handsome toyboy, the end of this walk we did back in one of those sunny days of summer (yes, there were one or two)- in Feb's Cornwall Today.

This is one of my favourite parts of Cornwall, first brought to my attention as a teenager, reading Daphne Du Maurier's Frenchman's Creek, inspired by the pirates and free traders who worked these waters during the Napoleonic wars. Long ago Helford was an important port where trading ships brought rum, port, tobacco and lace from the continent. Those days are long gone, the houses mostly holiday homes, but Du Maurier's descriptions of the Helford river are so vivid, you can still identify this magical, secretive part of Cornwall.

On a stunningly bright Wednesday, Viv and her dog Titch met me and Mollie Dog and we drove out of Falmouth to Mawnan Smith. In the village we followed signs to Glendurgan and Trebah Gardens, then on to the Ferryboat Inn. Nearing the bottom of the hill is a car park on the right where you can park all day for a pound. We then walked the remainder of the way down to Helford Passage and waited for the passenger ferry (£5 return for adults) on the beach outside the Ferryboat Inn.

With a brisk north easterly blowing, the pontoon was bucking like a nervous horse, and Viv paled as Mollie and I clambered aboard. “Are you sure about this?” she said. Trying to still my stomach, heaving along with the waves, I nodded and clambered into the little passenger ferry as it tossed and turned alongside. Viv gulped, picked up Titch and hurried on board. Thankfully that was the difficult bit – by the time we reached Helford Point opposite, it was more sheltered, and Viv and Titch were looking decidedly less hangdog.

Much cheered by reaching dry land, we walked along the path towards Helford Village with time to appreciate the sun sparkling on the river. Heading through the village past the Shipwrights Inn (closed from 2.30 till 6pm so don't try and go there in the afternoon), we continued over a footbridge and on reaching a row of whitewashed cottages, turned right by a Public Footpath sign saying Manaccan ¾ miles. After a short distance the lane continued past a thatched cottage and into woods where the sun danced through the trees, dappling the leaves with an intense white light.

We followed the path as it forked right over a stream, over a small granite stile up through the woods and into a field. At the top of this field we climbed over a stile signed Alternative Permissive Footpath and into another field to the left of Kestle Farm which looked as if it was being done up for holiday cottages. At the end of this field was a sign on the right to Frenchman's Creek so we followed that through a gate onto the main road. A few yards further on we took the Public Footpath sign on the left which led to another path by the side of a field with a hedge of bay trees, looking out over lush green fields.

Passing through a wooden gate we passed a seat made of a huge slab of granite, with orchards on our right and headed down into more woodland, past chubby rose hips and tiny, disillusioned blackberries. The rough lane had diagonal stones acting as gullies to channel the water that must run through the woods – a sensible precaution in these times of abundant rain. We passed a huge old oak tree with the trunk split in half, smothered in thick moss; further up its ivy coated branches, bracken sprouted like tufts of hair.

Coming to a fork in the path we followed a sign indicating Frenchman's Creek (Permissive Path) and headed even further downhill. “Hmm,” muttered Viv. “What goes down must come up.” But at that moment we reached the creek and all thoughts of steep hills were forgotten. Frenchman's Creek is a secretive, silent place, ingrained with the sense of times gone by. The dogs danced along the mud in the dazzling sunshine while we stopped and just looked. At low tide the creek is littered with rotting trees, draped in seaweed; a lone egret stalked through a mud bank while rooks cawed above. As we followed the path alongside the creek, a pigeon squawked loudly in the trees and a narrow trickle of water wound its way down the creek in an S shape.

The dogs had a wonderful time hurtling through the trees, and as we walked along it was easy to imagine the heroine of Frenchman's Creek exploring the bank, pausing as she saw a strange ship at anchor, moored in the creek. Heard a sound of tapping and hammering, then a burst of French singing. Here Viv burst into something she sang at school which involved 'sabots' but was probably not sung by French pirates.

We passed over three footbridges, and by a tree on the left, we took the right fork which led up some steps then followed the Creekside Path which did just that, passing round the end of the creek, where we had a wonderful view of the two old quays of traditional Cornish stone, the Helford river shimmering before us, and the final resting place of an old shipwrecked boat. Out in the open we inhaled the toasty smell of sun baked bracken and continued until we reached a tarmac path where we headed right uphill with a field on the left.

At the top of this steep hill is a conveniently placed bench, today occupied by people having a picnic. Both dogs rushed over hoping to share their food (no luck) and we joined the picnickers for one last look back across Helford River. On past here, we turned right along a track signed Penarvon Cove, crossed a submerged cattle grid and turned left signed to Pengwedhen and Helford.

Heading down this lane we passed another tree covered in bouncy ivy, like an affro hairstyle. Coming to a fork we continued downhill until we reached Penarvon Cove, an idyllic spot with several picturesque National Trust cottages being repainted to the tinny tunes of Neil Sedaka coming from a tiny radio hung on a wall.

We sat on a log here while Viv ate her pasty (my sandwich was long gone) and as we stretched our legs in the sunshine, real life responsibilities seemed a long way away – and then I realised Mollie had gone missing. I found her with her head in someone's dustbin and felt it was time to move on. We followed the Public Footpath sign back through the woods, climbing away from the cove, through a metal gate at the top, and continued until we reached a steep path leading downhill to the left, back into Helford Village, by the Shipwrights Inn.

From here we turned left back to get the passenger ferry back to Helford Passage. It was such a lovely afternoon that we bought ice creams at the beach kiosk (strawberry for me, vanilla for Viv) and wandered along to the private (dog friendly) beach where we sat and lapped up the sunshine and planned our next walk.

“You know, this part of Cornwall reminds me that I'm just an insignificant walker,” said Viv. “I have no rights to this beautiful place, but feel so lucky to be able to pass through, enjoy it, and leave it undisturbed. I only hope it stays like this for the next few hundred years.”

What a wonderful piece Sue. Your writing brought me right back to Frenchman's Creek...heaven on earth.

Lovely post FP and I love the little toyboy! :)

You describe it all so beautifully. I can't wait to go and visit there myself.

We've had some lovely holidays in Cornwall. This post brought back memories.

I wonder if the bench of which you speak is the one where DH proposed? Is it the one that over looks the beginning of the creek and Groyne point?

Fia - oh thank you! It really is heaven on earth.

Debs - It's well worth a visit - though the weather helped.

We have never done that walk when I have been over. Put it on The List for April, please. Oh, and order some good weather too.

Will pop back to give this glorious tale the attention it deserves. Just thought I'd say hi.

Leigh - good to meet you! Glad you had happy holidays here.

Oh Liz what a wonderful place to be proposed to (is that the verb? you can tell it's friday!).

Shelagh - I will try my best. Looking out of the window now it seems impossible to imagine sun!

Hectic on the work front sounds good, Sue! I enjoyed the walk with you and the photo of Titch is lovely... but what's happening on the boat front?(perhaps I'm better off not knowing!!!).

Chris - well we are on Plan B or is it C? More of that next blog - promise! We've downsized, just to give you a clue. Or we will have by next blog post!

You go on some pretty amazing walks and remember them so vividly - or do you make notes on your way round. I imagine the dogs did enjoy themselves.

I take a tape recorder, CJ - I'd never remember everything particularly as the walks often take several hours! The dogs had a brilliant time and we're hoping to do another one on Wednesday.

I'm glad you are busy with work, that must be a priority in these difficult times. I always love reading your posts about Frenchman's Creek. Maybe one day I will make it there for a walk too.