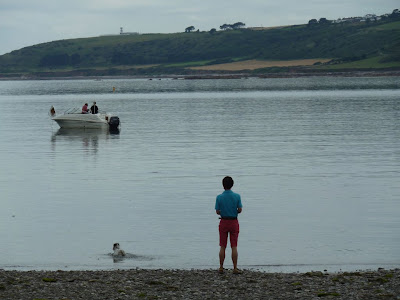 This is me and Molls on a wonderful walk round Noss Mayo last week. My holiday was all too short – 4 days not nearly long enough to recharge my batteries – but wonderful and the drive to Devon went well. Dear Pip was very protective of me and as I don’t enjoy driving, he would do it for me. Now I decided it was time I did it myself, sang most of the way, even enjoyed part of it and have a sense of achievement. A friend had checked the van over for me before I went which also gave me confidence, so that’s another box ticked.

I had a great few days walking and nattering with my dear friend Av. We also hit the charity shops and for those of you interested in Acquisitions, I found a pair of denim cut offs (Per Una) that could have been made for me, plus t shirt at combined price of £5.50 so I was well chuffed with those.

My contact lenses also got the thumbs up from both Av and my mum – “I can see your eyes again,” said my mum in bewilderment. “You look amazing.” Though I think that was more down to the fact that my face is brown and I was wearing a bright pink t shirt…

Poor Mum hasn’t been having a good time of things recently but I think we cheered her up a bit, took her to the pub for supper and had a meal with my good mates John and Annie another night, all of which meant I had fish pie three nights running but who cares? I didn’t have to cook which was a great bonus.

The only down side was coming home to an empty flat. Bussie (the remaining male resident of Flowerpot House) was absent. Now this is a bloke who likes his food. Who wakes me at 5 every morning yowling and demanding his breakfast. I called and called. I searched the neighbouring streets. Asked the neighbours. Rang local radio station. Still no Bussie. Several years ago he disappeared when he was injured in a cat fight so I figured he’d either been in (yet another) fight or been shut in somewhere. Like most of the men in my life, he’s frequently in trouble.

On Sunday night I came back and there sitting in the hall was – “Bussie!” I cried. He was very thin and found it difficult to walk. His back legs were creaky and he was filthy. He could hardly eat but since then has been eating and is more mobile but I’m keeping a close eye on him for the next day or two. A trip to the vet might be on the cards (though given the last bill I’m hoping to avoid that).

Tonight I’m off to the Poly in Falmouth for a friend’s private view and on Sunday I’m going to Port Eliot festival, so next week I will fill you in on that – oh and tell you about my unexpected meeting on Dartmoor with a pilot. Sometimes you never know who you’re going to meet, where….
Posted by Flowerpot at 09:26

Your trip sounds like it was great fun and congratulations on your shop 'finds', it's always so satisfying buying things that fit perfectly.

Hope Bussie is back to 100% soon so that you don't have to take that trip to the vets.

Thanks Debs - it was lovely. Just could have done with longer! Am keeping everything crossed re Bussie...

Your bargains at the charity shop sound fantastic! I tend to donate rather than buy but I may just have a look round next time I take something in.

Glad to hear that Bussie is back, I'm sure you'll soon have him feeling 100%.

I'm so happy to hear you're getting out and about Flowerpot, I'm sure Pip is watching you nodding his head too. x

What a beautiful picture; the word "reflective" came to mind as soon as I saw it.

So hope Bussie is okay. They're pretty strong aren't they so I'm keeping my fingers crossed he recovers soon.

Hi Sue! I was first introduced to Cornwall when I watched the classic movie, Frenchman's Creek, (and then of course read the novel by Daphne Du Maurier) and it looks (and sounds) altogether lovely. Plus it's not hot there right now!
;-)

I'm glad your Bussie came home. I'm a little worried about my cat - she and our little kitty love to rough-house and I think she got a claw in the eye. Ugh. May be taking her to the vet, too!

Melissa - good to meet you. Cornwall is just wonderful though it is grey and rainy today. Hope your cat is OK too!

Thanks Ak - go and try those charity shops. You can get some good bargains. And I think Pip would be raising his glass - I know he would!

Cor! You are really spreading your wings! I'm filled with cyber-prideosity as I read about all the new challenges you've taken on. I wonder what's next? Ah well, we'll find out in due course. In the meantime best to Bussie.

Sounds like you had a fab trip.
Sorry to hear about troubles with the cat. Hope he gets better soon.

Sarina - good to meet you and do call by again. Funnily enough I met my vet at the private view last night - she immediately asked after Bussie so I said she might be expecting a visit....

Chris - well, these challenges are here to be dealt with. It's either that or go under and having been there before, I made a conscious decision not to go there if I could. And I do feel that when you open yourself up to life, things happen. It's nice when they're pleasant surprises as well as the unpleasant ones!

I'm so glad you had a wonderful trip! It sounds amazing -- and how lovely Bussie has returned.

So glad you have a good few days away, and that you managed to drive and regain some driving confidence. And hope that Bussie will be OK - wonder where he got to?
Well done on the charity shop jeans. A friend of mine found a mint-conditon Per Una skirt in a charity shop, too. I never seem to have such luck with clothes but I did buy a set of 6 lovely white porcelain dinner plates for £4.50 a week or so ago! And three more Doulton ones for 50p each so nine lovely dinner plates (which we needed as ours were badly chipped, and I didn't want to keep using my 'best' 1930s dinner service all the time, although we don't save it just for high days and holidays!) all for a total of £6.
Margaret P

Talli - just need longer! But his Lordship is returned and eating me out of house and home again which is a relief!

Margaret - I have been a devotee of charity shops for as long as I can remember. And car boot sales. Nothing like a good bargain...

Really good trip i hope friend. Your bargains at the charity shop says you are a good bargainer. Visit php development companies india

Well I didn't bargain but they were good value!