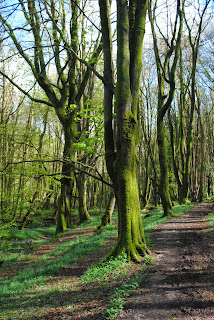 The above picture was taken at Constantine woods where we went to see the bluebells - they weren't quite out, but hope they will be soon.

For the first time in nearly two months, I’m beginning to feel more myself, in more ways than one - or more than I’m prepared to write about in public….

My energy levels are better, but that’s not just it. I feel more me, which is hard to define. I know this experience has changed me, but it’s too early to work out in what ways. I feel at once stronger and more vulnerable, that’s all I know. But I guess life’s like that. We hopefully learn from all our experiences, and they make us wiser people. Shame that by the time we’ve accumulated all this knowledge, we snuff it, but such is life.

I’m reading a book called The Bookshop That Floated Away, about a bookshop on a barge. In her book she talks about people who have walk on roles but she doesnt see again because she moved on - literally speaking, in the boat.

Someone who came into my life unexpectedly, and at precisely the right time, was Emma McCurrach, who runs a wonderful dog walking service called K9 Social. She took to Moll immediately and sent me texts when I was in hospital of pictures of Moll at the farm, and updates of how she was, which meant so much to me. She’s turned into a wonderful friend - at least, I hope she continues to be so - and is coming round for a curry soon.

That got me thinking though about people I’ve known in the past who have been very important for a while, then I haven’t seen them again. One is a friend called Sandra who I would love to meet up with, as we were very close for years.

Some people burst into our lives like shining stars, as if they’ve been dropped there by a fairy godmother. Some leave deep emotional footprints; some very faint ones. Some stay and some go but I don’t think that matters so much. It’s what happens while they’re there that’s important.

And I leave you with a quote from a film I saw recently. “When happiness shows up, always give it a comfortable seat.”
Posted by Flowerpot at 11:06

So glad you are feeling so much better and that the 'me' is returning to you. I know exactly what you mean. When I had ME for four years in my 40's I felt then that the 'me' had been stolen by the illness. It does come back, even if a little changed!
Hope to see you soon x x

Lovely to hear how well you're doing now. I do agree that some people burst into our lives like shining stars. Some stay around and others light up our sky briefly, like shooting stars, but both are valuable. Take care :o)

Thanks Sally - though of course returning to normal brings its own problems! Didn't realise you'd had ME - we must have our lunch and talk about it when you've got a bit more energy xx

Jane - you're right,they're both valuable.

Hello FP, I'm glad you are feeling and sounding so well and up-beat. It is a nasty operation both physically and emotionally, so you've definitely turned the corner, You seem to be surrounded by a grand circle of friends, that appear to stay not zoom off like shooting stars, which is lovely.
I've had many different friends through my life, we had a wonderful lunch with a friend and her husband who we hadn't seen for about 30 years, it just seemed like yesterday only that we were all a 'wee' bit older!
Take care,
love Di. xx and tickles for Molls xx

Di - I amvery fortunate in my friends, yes. Glad you were able to catch up with some old ones too! xx

I'm glad you are feeling so much better. It won't be long now and you'll be pulling up trees (or admiring the lovely bluebells!!)

Addy - thanks! Energy levels are much better so I hope so too!

So pleased that you are feeling more like yourself, only different. You've been through a challenging few months and it's been interesting following your progress.
It seems we are given friends for a season, some seasons are long & some are short, but they are there when they are needed, glad you've got some good ones for however long.
Take care & love to Moll

Kim - wise words! The lone sailor in particular has been wonderful.