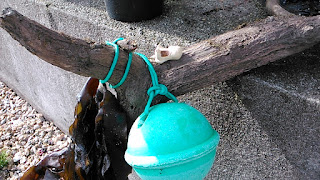 The call came at about 9pm on Sunday evening. A strange male, wanting to speak to Mrs Jackson. "We have your cat Buster here, and he's not at all well," he said.

It turned out that someone had handed a very poorly Bussie in to the vets earlier that evening. He'd been found in someone's overgrown garden, where he was hiding in an old greenhouse. I won't go into the details, as I find them too upsetting, but he wasn't well and hadn't eaten for a week. They suspected he had organ failure and was refusing food.

While I was so glad that he'd been found, it broke my heart to think of him all alone in someone's garden, unable to move. (Don't go there.) And I was really worried how ill he'd look, given the descriptions of him.

He was wrapped in a towel when I got there and screamed loudly when I walked in (nothing wrong with his vocal chords then) and began to purr when I stroked him and talked to him, foolishly as we do. "Why didn't you ring me, darling?" I said, tears streaming down my face. This lovely, impossible, stubborn feline that has been part of my life for nearly twenty years.

There wasn't really any decision to be made about his future. They'd already printed off the consent form which i signed, not really reading it. No, I didn't want his body, I had nowhere to bury it. I didn't want his ashes either (I've still got some of Pip's and had visions of my bedroom becoming an ashes closet - how macabre would that be?) - I have many, many memories of The Big Fella.

The ending was quiet, peaceful. Well, apart from me weeping copiously but I stroked him all the time, whispered more nothings but along the lines of "I'm here. I love you," just as I had with Pip. And that was a final farewell.

Apart from the bill which was so unexpectedly huge that I went into complete shock (well, I was halfway there anyway).

Since then I've been staggering around feeling exhausted, muzzy headed, unable to think clearly. In need of comfort reading. Al took us for a sail yesterday and we sailed miles out into Falmouth Bay, with me on the helm, the spinnaker ballooning majestically out as we sped along, the land slipping away from us. Gulls wheeled overhead; a cormorant flew low over the waves before diving cleanly down without a splash. AT one with nature, the elements, my head emptied out until I was nothing.

But in a corner of my beach garden now sits a little china Bussie, on top of one of the chunks of driftwood. He's facing into the sun at the moment, for he always loved to sunbathe in the mornings. But I shall move him round, depending on the weather, so he has a change of view. Thanks darling Bussie, and I hope you enjoy your new home. 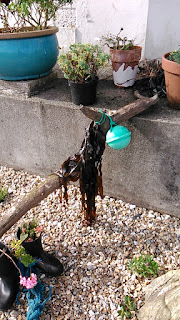 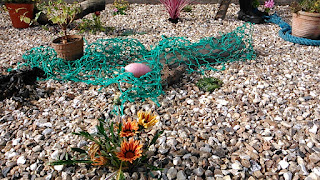 I am glad that at last, he was found and you were both able to say goodbye to each other. Take care.xx

Glad you to got to say your goodbyes to each other. Will be thinking of you Sue. I know you have lots of good memories of him, they will help in the coming days. Take care, love to you & Mol

Kim - yes it was good to say goodbye otherwise we were in limbo. Thanks for your thoughts XX

So sorry he could not be saved, but at least you got closure and was with him at the very end. I am sure too he was comforted by you being there. x

Thanks Addy - I think he was glad I was there. X

Hope you are ok Sue. Been thinking of you.