A winter duvet to warn off the blues 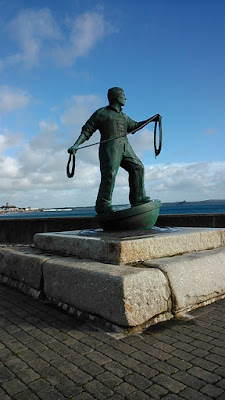 This is the fabulous bronze statue dedicated to all the Newlyn fishermen who have died since the 1980s - far too many of them, sadly. We walked past this on the way to Newlyn a few weekends ago, doing the first walk for my new book.

It's strange how our moods can change, isn't it? Last Thursday I went to an inquest with a dear friend of mine whose partner's son had very sadly committed suicide earlier this year. As you can imagine, it wasn't the most pleasant of ways to spend an afternoon, but no one wants to have to go to those things, let alone on their own, so I was very pleased to be able to offer some moral support. I was very impressed by the professionalism and thoroughness of the investigation, too. They were very sensitive to the witnesses and offered a volunteer in case anyone needed emotional support in the Coroner's office.

The worst part, for me, was coming home to a cold, empty, dark flat. This is one of the times when living on your own isn't much fun, paticularly in winter. I did meet a friend for a drink which cheered me up a bit, but as I lay in bed, on my own, I was very grateful for darling Moll at my feet. And wishing for some strong arms around me.

So the next morning I felt really miserable. About everything really. But I walked Moll, got down to work, and gradually I began to make headway. And that afternoon I went to a friend's for rehearsals for the numbers we were singing at the Looe Literary Festival the following day. Paul greeted me wearing a red patterned fish hat and blue goggles - one of the numbers is an a capella version of Yellow Submarine. And from then on, we had a brilliant time. The rehearsal went well, our singing improved, and then I realised the time, said I'd better walk Moll before it got too dark. "Can I come?" said John. "And me?" added Paul. "And me," said Heather - and so we all set off, Paul in charge, and had the most wonderful walk through a farm, down along fields onto Point Quay where the sky turned rose pink streaked with purple. The reflections of the swans on the river were perfect mirror images. And the trees formed blackened silhouettes against a perfect pearly sky.

We walked back through woods of ochre leaves dimmed by the twilight. As it grew darker, we switched on our torches and shouted out warnings of what to miss - dark and sinister tree trunks, like silent buildings; hidden, huge cow pats, darkened ditches and muddy puddles. And as we walked, our voices rang out in the dark of a Cornish evening and I felt a warm glow, which started from within and spread outwards. What fabulous friends I have, I thought, wrapping this duvet of happiness around me. Isn't singing wonderful?

It's a long time since I realised I was really happy. So whenever I feel down I will reach for that duvet and pull it tight around me, up to my chin so only my nose sticks out. The best way to combat the winter blues. 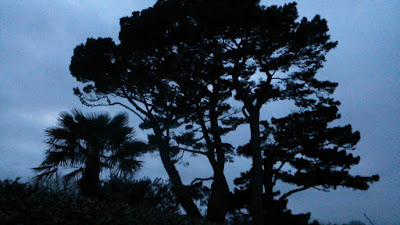 I am so glad that the love of good friends and singing together in such a beautiful place lifted your spirits.xx

Thanks Sally - singing is just wonderful, isn't it? XX