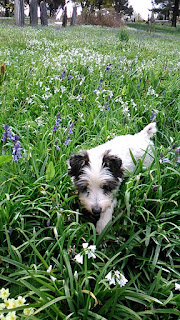 Poor Moll has had a few weeks - actually, a month, on and off, of an upset tummy (I'm being polite here) which, as any pet owner will appreciate, is incredibly worrying. To say nothing of incredibly expensive - three visits to the vet last week, including sending samples off to the lab - results awaited tomorrow.

However, this morning she seems a lot better, and while I am wary, I am also so relieved. I feel like jumping with joy - although the poor girl is on reduced walks and the most boring bland food you could imagine. You can imagine her expression - it looks like eating rice krispies and I'm sure tastes about the same. However, along with a good friend of mine who is a homeopath, the two remedies seem to be doing the trick so I am crossing fingers that it lasts.

The other thing was last week I suddenly became really dizzy, during singing. I thought Oh it'll pass, but it has got worse so I went to the GP who said it's labrynthitis. It's an infection of the inner ear but basically I have to rest a lot, drink plenty of water and do weird exercises which include lying down to the left and right, 15 times a day. No, it's not a weird joke but supposed to re-set the crystals in the inner ear.

But it's a pain. I've had to cancel most things this week, haven't been able to work longer than about half an hour before having to lie down. One minute I feel OK, the next it's as if someone's just pulled the plug on my energy and I have to go to bed. I dimly remember having this years ago and it did take several weeks to pass. So let's hope this passes sooner than that. It's very frustrating!

So here's from the two incapacitated ones, wishing you all a good week. This was taken several years ago now but Moll doesn't look a day older, dear of her. 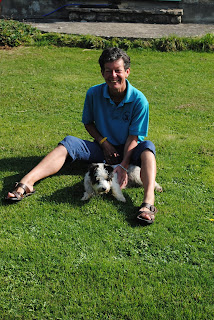 Poor both of you. A friend of mine had that, she said it was horrible.

Hope you both get better soon. This heat has not helped. Even though the sun is not out much, it still seems muggy.