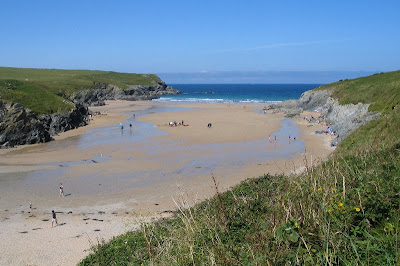 I recently volunteered to take part in a trial for treatment of Seasonal Affectiveness Disorder.

I hadn't realised how much weather can affect me until several years ago when we had a(nother) lousy summer, then I got food poisoning. By late September I was feeling terrible, and rang a girlfriend in desperation.

“Can we meet for a long weekend?” I said (she'd just moved to Bournemouth: a long way from Cornwall.

She agreed to look into it and rang back the next day. “You've got a choice,” she said, with a catch of excitement in her voice. “It's a week in Spain or ten days in Menorca.”

We opted for the ten days, said goodbye to our respective partners and did a runner. Typically we arrived in the middle of a storm and spent the first day freezing, the next day going to a market and buying thick sweatshirts and wondering what the hell we'd done. The next day the sun came out......

That really set me up for the winter and I returned home tanned and beaming to pick blackberries in the greyness of a Cornish October. Now we have Mollie (whom we would not leave behind) but anyway finances rather preclude any foreign jaunts, so I am now sitting in front of my lightbox, getting my daily dose of light (there being none from the sun), and reading my booklet on ways to beat SAD. This includes Getting Outside – not a problem given a) my propensity to cabin fever (inherited from my mother) b) itchy feet and c) Mollie. But there are suggestions for beating negative thinking, Trying New Things and eating sensibly.

I'm charting my progress. So far I've joined the most amazing choir which has lifted my Thursdays beyond belief. As I was having a wobbly time, I tried the ways to beat negative thinking (and I think that helped), but a good sing helped more than anything, followed by a chat with new friends over coffee afterwards. I do eat reasonably sensibly anyway

So, does the lightbox work? Well, given the weather we've had over the past month, I haven't being dragged down into dire depression, put my head in a gas oven or murdered my husband. So I think the answer must be yes.

Do any of you suffer from SAD and/or tried a lightbox?
Posted by Flowerpot at 09:18

Firstly, glad that you hear you are feeling better. I can't sing but can imagine how good it must feel to be part of that powerful, beautiful sound.

SAD? Well I'm certainly fed up with endless rain and gales and would love to feel some sun on my face but, luckily, for me that's all it is, thank goodness.

I haven't been diagnosed with it but I definitely feel a huge shift in my mood when winter comes.

What I'd give for 10 days in Menorca!

I don't think I suffer from SAD but I definitely do hate putting the clocks back in October and rejoice like mad when they go forward in March. I think it is more to do with the fact that I simply hate the long dark evenings and not being able to get out and do things in the garden. It'll be interesting to see if the light box really does help you.

Chris - you get an incredible high from singing. Better than drugs!

I think the 3 poor summers we have had made a lot of people very very down these last three Winters. I don't suffer from SAD but I have noticed being low when the grey skies hang over for too long. Today we have a bright sunny day in Northants and that has lifted my mood greatly. Good luck with your box, it will be interesting to see what you think long term.

Good to hear singing in the choir cheers you, Flowerpot.
It's cold but sunny here today and it's so much nicer walking T&T when it's like this.

Listening to beautiful singing is a wonderful experience. I would love to sing, but am dreadful.

Glad to hear you're feeling better. I don't think this constant grey, rainy weather can be helping anyone at the moment, but it must be especially bad if you suffer from SAD.x

Laney - wouldn't that be lovely?!

Rosiero - I agree, I like being able to do things outside in the summer. But I also quite like snuggling up in front of the fire!

I definitely feel down in winter, though I haven't been diagnosed with SAD. I haven't tried a lightbox but I may in the future.

MOB - thanks for that. We haven't seen the sun for a long time - or so it feels!

Pat - I look forward to some sun. Good for Vitamin D too isnt it? Hope ouy enjoy walking your 2!

Debs - I would hesitate to call our choir beautiful singing, but it sounds good!

I am way, way better in the summer, mood wise, energy wise, diet wise. If I could escape for the whole of winter I would:-)

Your choir sounds great fun and a perfect antidote to grey days.

Lane - escaping for the winter sounds a great idea. In the meantime, singing will have to suffice!

SAD sounds almost attractive to someone who lives in a place where it's relentlessly hot and sunny, and who finds the heat really enervating.

I have a friend who belongs to a choir and she too says the weekly sessions always lift her spirits.

Liane - over here we are all dreaming of catching just the odd glimpse of sun! But I can imagine having it day in, day out must be very different.

I suffer from SAD and dread winter every year. I've got a small (cheap) lightbox but am considering getting a bigger more expensive one if they actually work. Am also seriously thinking about going away somewhere hot in January. I need to feel the sun on my face :(