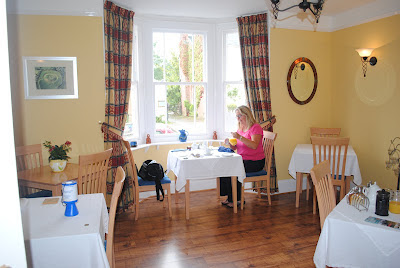 Last Wednesday Viv and I headed up to Exmoor to review The Old Cider House B&B for a publication featuring dog friendly accommodation (that’s Viv in their dining room). I’ve reviewed several places so far, in Devon and Cornwall – one hotel, one self catering and now this B&B and while they’ve all been a real treat for me, I never know what to expect.

We stopped off at Dartington to take my mum out for lunch at the pub near the care home she’s in. She was much better than the last time I saw her, and can walk better, but she is convinced that she’s not making progress, won’t be able to cope at home etc. She’s much more capable than she thinks she is but she did admit that she badly needs stimulation. Life at the care home is very small and drags her down as the only things going on are meals (and she doesn’t eat enough anyway), medication and visitors. Then she’s in bed by 8.30 because she’s shattered. We’re aiming to get her home but with carers to start off with, and she’d be much better there with her friends around her.

We took the dogs for a run after lunch then headed up to Exmoor, to a small village called Nether Stowey which is like Cranford but with more pubs. At the Old Cider House we were greeted by Ian who took us up to our rooms where, on the bed was a wonderful dog welcome pack – poo bags, home made dog biscuits, tags saying “We are staying at The Old Cider House” and he brought a dog bowl for water as well.

On hearing that my blood sugar level was low he nipped downstairs and returned with home made biscuits for me and some fresh milk so we could have tea in our room before heading out with the dogs. What service! 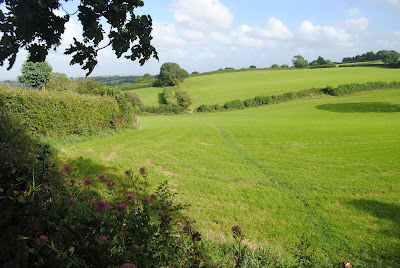 This is one of the fields nearby - there are loads of places to walk from the B&B. The two day break was fabulous, despite torrential rain both mornings, though we did manage several walks, and also a tour round the microbrewery, where Ian brews his own beer. The food was fabulous and Ian and Lynne couldn’t have been more welcoming and entertaining – in fact, we couldn’t fault anything. We had dinner with them the second night in the Ancient Mariner pub, and went to Glastonbury as Viv had a yen to go there.

So if any of you fancy a few nights away, with or without your pooch, I would heartily recommend The Old Cider House. I can guarantee you’ll have a wonderful time.

That looks fantastic... and I wish someone would bring me home-made biscuits! Glad your mum is improving.

That sounds like the perfect place to stay! I hope your plans for your Mum go well, I imagine she would do much better in her own home.

Thanks Ak - she will be much better off at home with her mates around her.

Talli - all the food was wonderful - we were really spoilt!

That sounds like a good couple of days. I hope you can get your Mum home soon - friends being nearby are so important :)

The Old Cider House sounds lovely, quite a home from home. We stay in hotels and B&Bs quite a lot and notice that more and more people are taking their dogs on holiday with them.
What's the name of that publication you write the dog-friendly accommodation reviews for, Flowerpot? It sounds interesting.
Hugs to your mum. Glad to hear she is improving. xx

It's to do with Your Dog magazine, Rena - they publish an annual booklet on where to stay with your dog and I'm one of their reviewers!

Sally - it was a great couple of days - despite lousy weather!

I hope your mum continues to improve - my heart went out to her reading about that 'routine'.

The Old Cider House sounds wonderful - any place that brings you home-made biscuits on the hurry-up has got to be good!

I fancy a few nights away! If only I could afford the airfare over there...

Melissa - I wish you could too!