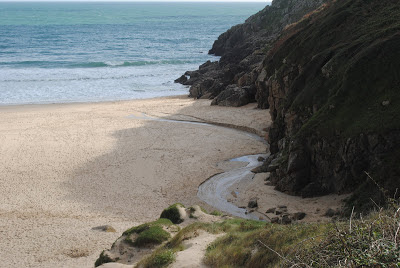 This picture is Porthcurno beach and has absolutely nothing to do with this post, but as it's grey and windy and about to rain, I thought I'd cheer us all up.

I don’t drink caffeine because it started to disagree with me about 20 years ago. By that I mean it makes me very hyper. In those days decaffeinated tea and coffee wasn’t widely available, so I carried on drinking tea, knowing I wouldn’t be able to sit still for an hour or so – or had to go for a long walk afterwards.

Then it occurred to me that I was getting needlessly exhausted, so I switched to the decaffeinated stuff and – believe me – you get used to it. Anything for a more peaceful life. I like my coffee very milky anyway, so it doesn’t make that much difference.

But last Saturday, I had a really busy day. And having had an unexpectedly late night (but well worth it) on Friday, I decided perhaps I’d better have a cup of Real Tea to get me through the morning. I did, and at first it had no effects. But by the time we got to Truro to warm up for a gig at Truro cathedral, I was beginning to buzz. By the time we started singing, I could feel the caffeine running through my system like liquid fire. While I felt so alive I was flying, the shaking legs and pounding heart were strongly reminiscent of a panic attack.

The next few hours passed in a blur – we left Truro and I rushed back to pick up Moll and drove like a bat out of hell to meet a friend and go boating. It was pretty lumpy (ie rough) but we explored a nearby creek, then decided to be reasonably sensible and take the boat back and explore the creekside path on foot with Moll. After that we had a quick drink at the pub – and I got home at around 8pm.

9 hours after having had a mug of tea, I was still flying. Unfortunately Louvitt was exhausted so we went our separate ways and I eventually sorted out things at home and settled down to watch a film with a glass of wine, making sure I stayed up late so the caffeine effects could wear off.

By the following afternoon, having met my youngest brother and his family, had lunch and taken the dogs for a long, bracing walk along the cliffs, I returned home to a cold, dark flat and not only came down to earth but fell into a cold, dark tunnel.

That slump lasted the whole of the following day, when my energies and spirits were so low I could hardly move.

So I’ve come to the conclusion that if that’s the price I pay for one mug of tea, I don’t think I’ll bother. As a friend said the other day, “you are so cheap to run”.

I gave up coffee about 6 years ago, for similar reasons (although tea doesn't affect me that way). About 6 weeks ago, out of tea bags one morning, I thought "one coffee won't hurt, will it?" (I keep it in the house for guests.)

OH MY GOD. Seriously, I was flying, like you said, and stupidly I am now having one coffee every day, in the morning. But since that first cup, I haven't been sleeping properly and my anxiety has increased. It's only having read this that I've thought "Oh. It's the bloody coffee, isn't it?"

Thanks for that...I now know what to do. x

I'm glad it's helped you, Elaine. Incredible the effect it can have, isn't it?

I switched to decaf tea and coffee about 10 years ago when I was on the Atkins diet. I gave up the diet but stayed on the decaf. When I switched I had a headache for two weeks - detox I presume - but if I inadvertently drink caffeinated tea and coffee now I get the shakes.

Wow! Seems caffeine has a definite effect on you. I only get that way if I drink more than three cups of coffee, but I have to agree, it's a horrible feeling... especially when you just want to sleep!

I experience similar health effecting symptoms when I drink some alcohol. Since I contracted asthma drinking alcohol usually makes me feel pretty ill. My sinus membranes swell and I get an awful banged up nose and a headache. It makes me feel as if I have hayfever and I usually end up having to take antihistamin tablets to combat the effects. I have also decided a few years ago that a glass of wine is not worth all my health troubles it gives me. So, I always make sure to avoid all alcohol now, even at parties. My health comes first, and I have now gotten used to being a tea total. After a few years of going without alcohol it just doesn`t even taste nice anymore. So, why should I have it at all?
Look after yourself, as life is far too short to mess with your wellbeing.
Take care!

Talli - I was lucky I was able to sleep eventually, but dont think I'll risk it again!

Sarina - I'm sorry you have similar problems with alcohol - that sounds horrible. And I would miss it! But I suppose like caffeine, you just get used to being without it.

When I was in England back in 2008, I mistakenly drank a cup of caffeinated tea right before bed. Let's just say I didn't get to sleep until hours afterwards!

Usually, caffeine doesn't bother me that much, but it did that time.

Poor you. Clearly not worth it.

Colette - no, not with hindsight!

Melissa - I would have been climbing the walls!

I don't drink caffeine either, but my reasons are because I can't. It affects my epilepsy. i don't know what the difference is now because it's been so long since I've drunk caffeinated drinks. I can't even drink pop with caffeine in, and as I'm completely tee total, it's either water or water for me!

I was thinking about you the other day when watching a program about Cornwall; I can't remember what it was but it was on just a few nights ago. It could have been Countryfile. Oh dear, my memory is getting really bad!