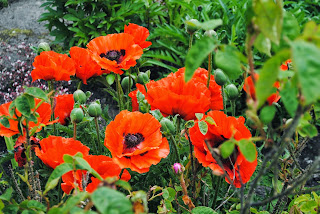 A week or so ago I received an email from my Cornwall Today editor asking simply, “do you like Rosamunde Pilcher?”

I replied, “Yes! Whatever it is, throw it this way (she said rashly)”.

Then there was silence so I presumed nothing was going to happen, but then she rang and said she was sadly too busy to do the interview, would I like to? You bet - and anyway, when an editor asks you if you’d like to do any interview, let alone one of the most famous writers of women’s contemporary fiction, the answer is never a negative.

So Mr B drove me round Falmouth, on the hunt for The Shell Seekers, or any other book by her. Nothing in the library. Nothing in my friend Tash’s bookshop. As I had to do the interview early this week, there was no time to order anything online. Kirstie had a copy so I was going to drive to Truro to get it when I was stricken by a really horrible tummy bug so that laid me up for a few days. I had read all of Mrs Pilcher’s books before, but it would have been good to refresh my memory.

Anyway, by Monday morning, when I’d scheduled the interview, I was sick with nerves. I’m not usually that nervous, but then I don’t usually interview authors of such calibre. I had to force down a few mouthfuls of toast, and took Moll for a walk, trying to work off my extreme nerves.

I knew I’d be all right once we got going, and I was, but the Before is always nerve racking. But she was a delight. An incredibly sharp mind - she’ll be 90 in September - and with an incredibly clear memory. She’s also a wicked mimic and has an endearingly rich gurgle of a laugh.

We wrapped up the interview and I felt really blessed to have talked to her. Shame we couldn’t meet in person, but what a privilege that was.

Read all about it in September’s issue of Cornwall Today!


And on Sunday we are singing at Heligan Gardens, taking part in the Wildworks Production of 100: The Day Our World Changed. This will be a unique day of remembrance and commemoration to mark the outbreak of World War 1. The day will re-tell and re-live the lives of the brave men who went to war and the families they left behind. It’s a day for the community, about the community and involving as much of the community as possible.

So come along if you can - from 1030 at Mevagissey Harbour and ending at 7pm at Heligan Gardens.
Posted by Flowerpot at 10:50

I reread 'The Shell Seekers' last summer and loved it just as much as the first time - it's such a wise book and beautifully written. What a privilege to be able to interview Rosamunde Pilcher - a moment to treasure. Cx

Chris - I've just ordered a copy so I can enjoy it all over again!

You got to meet and interview Rosamunde Pilcher.... all I can say is Wow!
I loved The Shell Seekers and others I've read but can't remember the titles...
Wonderful writer.
I would love to read your interview, can I get it on-line ?
Happy sailing,
love Di xx

Di - no I didn't meet her - it was over the phone but great anyway! Not sure if it will be online but check the CT website after 20th August! x

Your 'job' just gets more and more interesting!

Rosamunde Pilcher is one of my favourite authors. I think
I have all her books (and a few of her son, Robin's)
You must have been made up to bag an interview like that. Can't wait to read it now. x

DC - I am lucky in having such a rich and varied job!

Rena - I'm still pinching myself! I haven't read Robin's books but will have a read. x

Have read several Rosamund Pilcher books over the years.

Love the pictures of the poppies, my favourite all time summer flowers

I hadn't realised Rosamunde Pilcher was in her nineties. I can quite understand you being nervous about the interview. I often find the fear of the unknown is often worse than the actual experience. I can get worked up about things in advance and then find it was half as bad as I feared.

Addy - I'mexactly the same! Conversely, if I don't get worried about things, sometimes they bite me in the back!

Colette - it certainly was!

Beautiful Poppies Sue, my favourite flowers ever. Have read several Rosamund Pilcher novels over the years. Didn't realise that she is 90 though

Beautiful Poppies Sue, my favourite flowers ever. Have read several Rosamund Pilcher novels over the years. Didn't realise that she is 90 though

Oh, wow! That is so neat that you got to her interview her!

Melissa - yes I was so pleased!