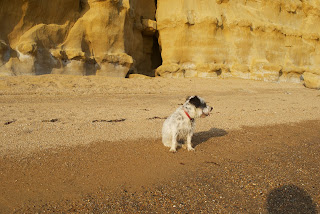 This is Moll in front of the magnificent cliffs at Burton Bradstock beach.

Last week I was fortunate enough to interview the architect, MJ Long, who was, with her husband, Sir Colin St John (“Sandy”) Wilson, responsible for designing the British Library, amongst many other works. MJ is well known for her work on studios and museums, and recently designed the National Maritime Museum in Falmouth, and worked on the Porthcurno Telegraph Museum, Porthmeor Studios in St Ives and the Princess Pavilions in Falmouth. Those are just a few of her many and varied achievements, so I was in some trepidation at meeting her.

We’d arranged to meet at Custom House Quay so we could go out for a sail in her South Coast One Design, and she rang me that afternoon to confirm the arrangements. It was blowing a Force 6 easterly - which means very windy and Falmouth is not a pleasant place to be when an easterly wind’s blowing.

But I met her and John, who has a share in the boat, down there at 5.30 and he was to row us out in the tender (a wooden punt which is heavy) to where the boat is, off Flushing. Well, poor John had hurt the tendons in one hand pulling the mainsail down the previous weekend, and his poor hand was black and blue with bruising, so he could only row with several fingers on that hand. Still, he insisted he would do it, and we headed off in this punt (an old wooden rowing boat) through waves that smashed against the hull, showering us with salt water, no matter how skilled a rower he was.

After half an hour of wind and tide against us, we reached the boat, but poor MJ wasn’t feeling well. She’d been up most of the previous night with food poisoning so hadn’t eaten all day, and then had to give a lecture at the Tate St Ives in the morning. By the time we got to the boat it was blowing a hoolie - not too much for the boat, but enough for MJ and to be honest, the weather wasn't too enticing.

We sat on the boat and chatted, then John rowed us back (what a kind man) and I set off to MJ’s house to interview her there. Many people who are very skilled at what they do, and have been doing it for along while, often talk in ways that I find largely incomprehensible. But MJ was a delight - she chatted away explaining the importance of light in buildings, how important boats are to her, and it was a really fascinating couple of hours.

I left there, feeling very fortunate to have a job where I meet such unusual, diverse and interesting people.

In contrast to then, we’ve had a few settled days of perfect autumn when I met Al down at Mylor harbour on Monday. There was no wind, but a sense of peace and mellow stillness in the lazy, hazy sunshine which made the brightness of summer seem almost too harsh. The first nip of autumn was in the air, but the gentle sunlight warmed my hands and soothed my senses as Moll and I walked towards Flushing.

Mr B often laments that you can’t hang on to days like that. But I think you can. I don’t need a photograph to remind me of the perfection of that day. It’s like a tattered photograph, much thumbed and loved, tucked away in the wallet of my mind. On wintry days I shall take it out and share it with him.

As an aside, SCODs are lovely, aren't they - although a little short of headroom. Veryan was a slightly bigger version of one. What a fascinating assignment - you certainly meet some interesting people in interesting places.

MJ has been i/c some amazing buildings! You are indeed very lucky to meet her even if you couldn't get out for a sail.

Chris - SCODS are lovely indeed - interesting to hear that Veryan was slightly bigger version. Yes it was a great assignment!

Another winner FP, again written so eloquently...
Your doggie, Molls certainly has a grand life lucky girl.
I wouldn't have like the ride in the rowing boat, sounded very rough!
I love watching a rough sea but not fussed on being on it in such conditions.
It seems such a long time since your operation, you've done so much in such a short time, so, well done Sue,
Love,
Di.x

Another winner FP, again written so eloquently...
Your doggie, Molls certainly has a grand life lucky girl.
I wouldn't have like the ride in the rowing boat, sounded very rough!
I love watching a rough sea but not fussed on being on it in such conditions.
It seems such a long time since your operation, you've done so much in such a short time, so, well done Sue,
Love,
Di.x

Thanks Di - it seems ages since my operation but the scar still hurts a lot at times which makes me fed up! But otherwise yes I have done a lot and should realise that! x

Just come back after a week in Wales. Monday we were at the beach and it was similar to a warm but not hot Summer's day. The sea was like a mill pond!

DC - wonderful isn\'t it? So glad you had such a good time in Wales!