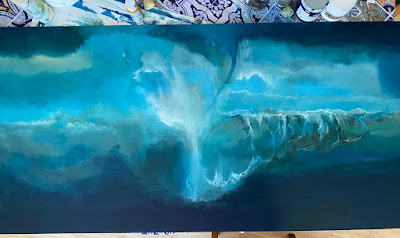 This painting is by my very talented friend Ernesto Pescini - check him out on Facebook for other works of his.

Much of Ernesto's work comes from emotional turmoil, as I'm sure you can see from this one. I find them tremendously gripping - they pull you in, and the more you look, the more you see.

When I first met him, he was a bit lost - aren't we all - and hadn't been able to paint since February. But I'm glad to say he has been taken on by another gallery, in St Mawes, and is now back painting again, producing an alarming amount of paintings in the last few weeks!

He also very kindly helped sort some problems with my van this week, which was much appreciated. Yes, Van Gate rumbles on a bit (not as badly as late last year) but having totted up how much I've spent on it this year, I've realised the time has come to start looking for another one.

But then, so much has changed this year. Just after Moll died I was walking with a friend who said she thought this summer would go down as the year when nothing really happened. At least you've got your DOG, I thought bitterly. I was in that stage of grief where just seeing anyone else's dog was too painful.

But now I have Lainy - yes, I couldn't let a whole post go by without mentioning her. And Ruth, who is a dog whisperer and creator of all things caninely magical, said she couldn't believe the change in Lainy over the past week. She's gone from being scared of everyone and barking like mad, to - in a single week of meeting more of my friends, at home - welcoming them in. We've done quite a bit of work, instructing friends to give her a chew on arrival and a few other things - and lots of training, but the difference is incredible.

Now Lainy chews her chew, comes over to greet our guests, then lies on the carpet and usually goes to her bed. Quite remarkable. She also mastered going to a pub for the first time and I am so proud of her I think I might burst.

She was lost and then I found her, but more to the point she has rescued me, just as much as I rescued her. So thank you my darling girl. 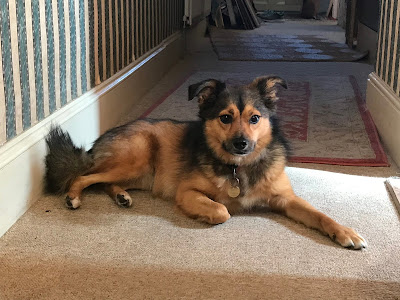