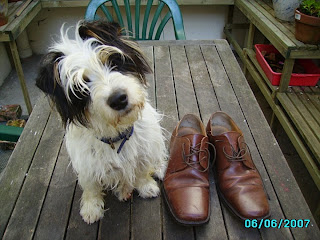 I asked Himself this morning why when Mollie was a puppy, he chose her instead of her almost identical sister.

‘Because she had a shorter tail,’ he replied.

That flummoxed me. ‘What’s that got to do with anything?’

‘It’s all about proportion,’ he said. ‘Mollie was just right.’

Though how he could tell that when they were eight weeks old, scampering around a loose box on a farm in the middle of nowhere, I can’t think.

‘Mollie was more adventurous,’ he continued. ‘The other one was rather timid, so I felt Mollie was Just the One. Though the other one had better colouring.’

‘Did she?’ I said. Astonishing how an unobservant man can remember such details in a tiny puppy – and this was two years ago.

‘Yes,’ he said dreamily. ‘The other one had better markings on her body, but more brown on her face. But Mollie was perfect – a bit like you, Flowerpot.’

What a creep. But a nice one.

The liveliest of the litter is usually a good choice (and Mollie is certainly full of beans). Isn't it a good sign for their future health? Let's hope so.

I certainly hope it's a good sign, RT, but Jacks are usually pretty healthy aren't they?

sorry RT, post amended as I forgot vital bit at the end!

What a sweetie Molly is! That was some compliment. ;)