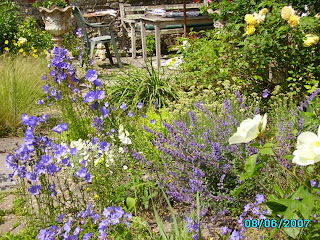 And no, the garden has nothing to do with Bob Monkhouse, but is a way of alleviating a serious subject. Did you see the Bob Monkhouse ad on BBC News last night? In it, Bob Monkhouse has been computer regenerated to warn against the dangers of prostate cancer, a disease that he died off in 2003. The ad sounds and looks just like Bob and, according to his widow, Jackie, he would have liked it.

It blends humour with the serious message that prostate cancer kills 24 men a day in Britain, while the Prostate Cancer Research Foundation says that one man an hour dies in Britain from the disease.

According to the blurb we got from a well known Cornish hospital in Truro, “only 3% of men die from this disease and 98% of us from something else”. So who and what are we to believe?

Prognosis obviously depends on how much it has spread, and there are varying forms of treatment. I can only speak from experience – or rather, secondhand experience, of Himself’s treatment. When he was diagnosed with the disease, we were told that it had spread, or metastasised, to the bones. That put the fear of God into us, as you can imagine, but I didn’t like to ask the oncologist exactly what that meant in front of poor bewildered husband.

So I sent off for lots of literature from all the main cancer agencies that specialise in prostate cancer, and the bumf is largely contradictory. I read some and felt relieved, read others and my heart thumped with terror, my hands became sweaty and I threw the papers away in case he saw them. I spent long nights staring at a blank ceiling wondering How Much Time we had together. I wanted to rewind the video and go back to a safe place without cancer, when we just had normal problems like paying bills.

But he started hormone therapy and despite the side effects – and they were BAD – the cancer level shot down in three months. Another three months and it was nearly zero. Shows what these modern drugs can do – but at a price. He had very unusual side effects – well, he would, he’s an unusual man. At one point I thought the drugs would kill him long before the cancer did. But the main thing is, the cancer is now under control and now he’s on intermittent treatment, he can lead a normal life again.

If you, or anyone you know has any of the symptoms of prostate cancer – difficulty peeing is the main one – please try and get your partner to see a doctor. The disease occurs mostly in men over 60 and while in most cases it can’t be cured, it can be treated successfully. So much more is now known about treating this disease, and it needn’t be a killer. Himself is a prime example.

It looks as though you acted sensibly and in good time......

What a worrying few months for you.

It was in fact down to Himself hearing a piece on Radio 2 that made him go to the doctor. And like most men it's normally impossible to get him anywhere near a surgery!

A worthy topic to raise awareness to FP, especially considering yours and "Himselfs'" own experience. Thankfully he went to see his GP in time and the drugs worked.
The advert was a marvel of technology and I'm sure that it will help get men that are worried to see their GP.