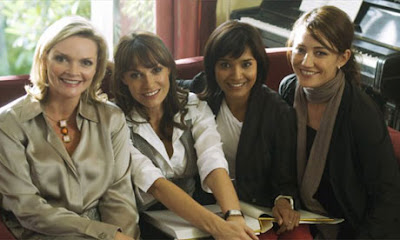 Last night we watched the penultimate episode of Mistresses which, for those of you that don’t watch it is about – er – mistresses. Clever, that.

I should explain here that the reason why I’m amazed that Himself has got so hooked on this programme is because he doesn’t watch soaps. At least, that’s what he says. His older sister reliably informs me that he was hooked no Neighbours many years ago, but he vigorously denies this, of course.

The plotline for the series is four women who are involved with various men and all in deep trouble.

Katie had an affair with one of her terminally ill patients and, when he begged her to help him end his life, she did. She then went on to have an affair with his son and finally told him what she’d done. Being a thwarted male, he spilt the beans, told mummy and Katie has now been suspended pending a court case.

Jess works for a party planning company and is having an affair with the boss. But when she organises a civil partnership, she slept with one of the women on her hen night. They start seeing each other again and she realises she is deeply in love.

Trudi’s husband Paul was killed on September 11th, she believed. But now a strange woman has turned up saying her son is Paul’s and now that Trudi has won a million quid on the lottery, she wants some maintenance. Trudi is now involved with another man but getting cold feet. She finally decides to give the woman some money and gets to the hotel, waits for hours and then sees her ex-husband running in with this woman and her child.

Siobhan has been trying to have a baby with her husband Hari for ages. As the marriage goes sour, she has an affair with a younger man at work, but when she discovers she’s pregnant, she lets Hari believe it’s his. The bloke at work realises, is livid and tells her where to go. Overwrought, she tells Hari the baby isn’t his and he is horrified.

So there you have it. Writing this summary, it reads as trite rubbish. I have trouble believing some of the situations, and I have no idea what message the programme is trying to convey. We presumably have to wait for next week for that.

But the writing is excellent; each week there are incredible twists and turns in the plot and the tension is racked up by the minute which all makes for very watchable stuff. We have been glued for the last five weeks and I can’t wait for next Tuesday.

Himself was just as keen until in bed last night when I said, “It’s a good soap, isn’t t?”

I hotly asserted it was, and this morning looked it up. According to Wikipedia, “A soap opera is an ongoing, episodic work of fiction, usually broadcast on television or radio.”

I told him and he listened in silence. Then he said, “I think it’s better than a soap.”

Sometimes, I wonder…
Posted by Flowerpot at 11:00

When you've seen Thai/Japanese/Chinese/Korean soaps you realise that the British soaps are of an incredibly high standard. Whether you like them or not is another matter, but Mistresses sounds great fun for those nights I'm on my own in front of the box watching reruns of some other rubbish.
JJx

Sounds like the sort of thing I would probably watch a few times while, naturally, saying that it was rubbish...

Spanish soaps are interesting and really far-fetched (I think). They don't concentrate that much on the sex, rather lots of plots and deception (business, friends, family). Latin American soaps are ..well...something else again.

oh.. I would probably want to watch that. Which channel is this on?
Quite funny that Himself would like it.. let alone defend it from being branded 'a soap'. :)

jj - I've seen some American soaps and frankly couldnt tell when one ended and the next one began. Try it, if you can get it over where you are!

k and p - well I think this one';s quite far fetched but hte writing is very good. A good lesson to anyone aspiring to write - loads of tension.

daniele - it's on BBC1 at 9pm. Yes i was highly amused that Himself enjoys it so much!

He loves the show but doesn't want to consider that it's a soap? Too funny.

They are addictive, though. The well written ones especially hook you hard.

I'm sorry I missed it and forgot to tape it, I was at toastmasters. I do think Mistresses is such an old fashioned word these days when women are so independent. Still, I hope to watch the final programme next week.

Tee hee - you caught Himself out good and proper!

I'm hooked on it too! It's been a long time since there has been anything that good on telly. Can't wait for next week's episode!

If we got that Mistresses show, I would watch it for sure!
Sounds good!

I must say, though, that an English soap is something very different from an American soap and this soap sounds like it is of a higher standard, although I have not seen it. I can imagine all the wonderful twists and turns and all of this done in a very English manner, which is always better than any other country could do it. Dutch soaps are very amateurish and I can't watch them at all for fear that I will end up hating all the characters in the show. I never watched American soaps, because they defied reality. Give me a good BBC program any time of the day, it is almost always preferable to anything else.

ellee - if not I will report back!

Zinnia - I'm quite good at that - years of practice!

Ak - so there is someone else who watches it! I'd be interested to know what the viewing figures are. Must find out....

little wing - shame you can't get it.

sweet irene - I wonder what it is about English soap writers that make them so superior?!