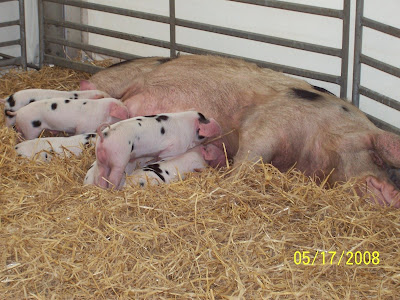 These are Gloucester Old Spot piggies, and the picture was taken at the tenth anniversary of the Truro Farmers’ Market a few weeks ago. Himself and I are both much enamoured by pigs – in fact he stood there and watched them quite contentedly for ages….

I heard yesterday that our local animal rescue centre has been badly hit by the credit crunch. They have noticed a big increase in the number of dogs being dropped off by distraught owners no longer able to keep their beloved pets.

Having to move into rented accommodation and most landlords won’t allow pets.

Having to work longer hours in order to pay bills, so the dog is left alone for 8 or 10 hours. Dogs are sociable creatures and need company; they can become destructive if left alone for too long.

People not able to cope with food, vet’s bills and/or insurance for their dogs.

I find this so sad, and it must be agonising working in an animal rescue centre. The only time I’ve ever been, I had to be hauled out in tears and taken for a cup of tea to get myself back together again. Seeing those poor animals who’d been badly treated, or abandoned, or both – don’t start me on that.

I have to say, it’s cheaper for us to feed Mollie per week than Bussie, but then Himself insists on feeding Bussie every time he goes into the kitchen. He sits by the biscuit cupboard – Bussie this is – with the most implacable stare. You can almost hear him saying, “Open the ***ing cupboard you silly fool.”

I glare at him, say NO and give him a stroke.
Himself says, “Oh, all right,” and gives him another plate of biscuits.

None of our pets are insured (she says, touching wood quickly) – having a scruffy mongrel like Mollie means that she is much less likely to have health problems than a pedigree dog – inbreeding tends to cause these sort of problems. And Bussie? Well, he’s a scruffy old farm cat. He did need vet treatment last year when he got an abscess following a fight he’d been in, but thankfully the treatment wasn’t for long.

It just shows that this credit crunch is hitting everyone. Not just you and me but our pets as well.
Posted by Flowerpot at 10:04

I would love to offer a home to a couple of those homeless dogs, what a shame. I wouldn't be able to afford to insure them either.

We're noticing it at Greyhound Gap too. Not so much in donations but in the amount of dogs on death row. We're also finding it hard to get volunteers to do transport runs withthe cost of petrol - even though we will cover that if necessary.

Actually, I'd like to offer a home to the piglets... they are quite gorgeous (and no I'm not talking delicious!) really rather beautiful. I think customs might stop me if I did try and adopt to bring them home however!

It's coming to something when people can't even afford to keep a dog these days isn't it? :(

That's a very good point. Pets tend to get left behind in all our worries about money. But they do cost money, they need just like we do and they are defenseless. If we can't look after them then they should be somewhere else where someone can look after them. I think taking them to homes is a good thing short term if only we could live in a world where we were 100% confident that the animal would find another good home and be well looked after. Unfortunately, that often isn't the case.

ellee - well as I said I haven't insured Mollie. This could mak eme fall flat on my face but - touch wood - so far we've been OK. You're more likely to need insurance with a pedigree dog.

AOJ - that is so sad. Poor dogs. I bet if Brown had a dog he'd think differently.

jj - they are lovely aren't they?!

Crystal - no you're quite right. if I had a bigger place I'd fill it with animals from a rescue home. Which is probably why we live in a one bedroom flat.

The vet has just told me my cat might have a tumour, we've just got to wait and see. The vet says they can operate but I can't afford it and i feel just terrible. Sadly I can get another cat, however much we love her, I can't get another child. 4 days I waited for a doctor in hospital while I cared for my child whilst given no food. After 4 days the doctor prescribed antibiotics and the dangerous temperature subsided within an hour. We were discharged within two. The care of children and old people in this country sucks. The government keeps telling us the NHS is better and there's less crime and we're all richer, but fp, it's obviously not true as you've seen. Sadly the pets seem the first indicator :-(

Phil - I'm so sory about your cat. It's terrible when that kind of thing happens. As for the government - well, I am almost speechless. Things certainly arent getting better in Cornwall.