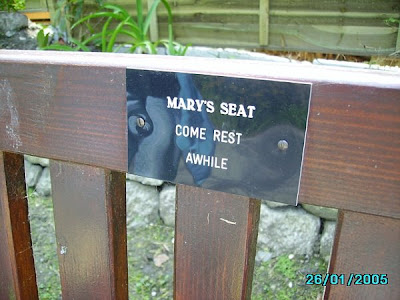 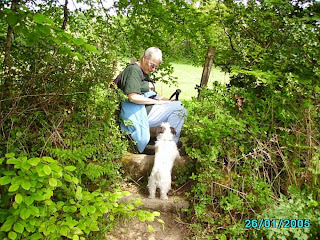 Yesterday, while Himself enjoyed a noisy jazz band in a hot sweaty pub, Shelagh and I took Miss Moll (as she calls her) for a circular walk through fields, trees, along by the beach and back through a hidden valley. We end up walking through a hamlet called Bareppa which is just like stepping into a children’s story.

There are quaint cob cottages, a beautiful old house – Bareppa House – with stone pineapples on top of each gatepost, and peacocks used to fly over the road into a nearby garden. Sadly these have gone, but horses graze contentedly in a nearby field, their coats gleaming in the heat. Around their feet the grass was studded with golden buttercups and pinpricked with daisies. You could almost imagine it was summer.

Half way round we found a wooden bench in the shade and did as we were told. We rested a while.

Later on we both went to the spa in Falmouth and had a massage – the last of my birthday vouchers. I got up feeling groggy and almost unable to speak, but after a while it settled and I felt clearer than I have done for weeks. Shelagh had 70 years of accumulated tension to disperse from her shoulders (“like concrete” according to the masseuse) and went to bed at 8pm.

As I lay in bed later last night, I found myself wondering about the bench. Did she used to sit there like us and think? Did she live there or was this her favourite magical spot? Did she sit and paint with her dog by her side? Who was she and what stories did she have to tell?

(Tomorrow we are off to the Daphne du Maurier festival to hear Salley Vickers talk. A lovely, literary day full of inspiration I hope. It also means I can revisit Jane's cottage and plan the next few chapters of Arthur.)
Posted by Flowerpot at 09:47

I think I'd like to rest a while on that bench too. I wonder who she was?

Glad the massage was good:-)

I would love to sit on that bench and contemplate my thoughts for a while. Not that they are very deep and heavy. They are just ordinary thoughts to be contemplated on a simple bench like that in a pretty spot like that. To rest for a while sounds very good.

Lane it was a wonderful bench in real magical surroundings. And a massage as well - wow!

noorje - glad to meet you - mine are ordinary thoughts too. Nothing the matter with that!

Oh the stories you could weave round that bench! The massage sounds heavenly. :)

That's my kind of bench, to sit and ponder. Enjoy your trip TFX

I could do with a bench right now. The place sounds idyllic.

Ak - yes I will have to go back and revisit it and put it in a novel!

Tom F - we all need a bench to sit and ponder on I think. Very much looking forward to Fowey today..

MissU - it is idyllic, particularly in this incredible weather!

What a fabulous day! You could make up entire novels about what might have happened on that bench.

How lovely to have some of your troubles smoothed away with a massage. Look fowards to reading about the next trip.

Chrish - had a brilliant time in Fowey and feel full of sun and words and friends!

Oh! You are lucky! I love Falmouth!
I am always seeing such benches in parks, seaside places etc. I often wonder too....... I wonder if some one will put a bench up some where nice for us..... one day!

Maggie - what a lovely thought! Yes i hope so too...

Your life sounds idyllic fp, and the bench is intriguing but what a lovely thought, I like that. What I'd give for a massage!

That sounds like a wonderful walk FP. I do hope you enjoyed the du Maurier festival.