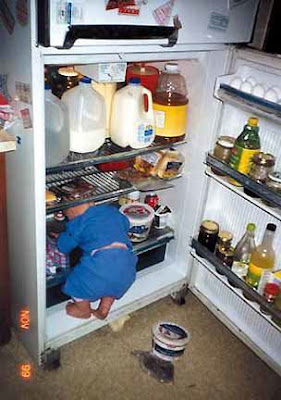 This picture has nothing to do with this post other than being a) cute and b) featuring a fridge.

I’m defrosting the freezer as I write this.

By that I mean that every quarter of an hour or so I have to jump up and boil another pan of hot water, empty the previous one and stick it in the freezer compartment. After a few hours all the mountains of ice will have melted and I can stick the contents of the freezer back inside: a strange assortment of bread, fishfingers, frozen peas, crumpets and an old quiche. Sounds tempting doesn’t it?

I found myself looking yearningly at Frost Free freezers the other day. How lovely not to have to go through this palaver every few months (or longer given the state of the fridge at the moment). But we’ve had a run of bills so the new fridge freezer will have to wait.

I’m very fond of it though because I’ve had it for over 15 years and can remember the moment I was offered it.

I’d come back from a Greek holiday with a friend and was Greekly brown (as opposed to Englishly non-brown) and showing off my tanned legs at a party given by a friend in Totnes. At that party was a friend of mine’s father, Ron, and his new wife.
Dear Ron was a vicar whose temptation was widows. His last wife – his fourth – was one he met, like the last three, at their husband’s funeral. He was conducting the service, you understand.

But I digress. Ron was moving into his latest wife’s new house (they must have been in their late 70s at the time) and offered me his fridge freezer. Delighted, I accepted and paid him the princely sum of £25. Bearing in mind he’d had this freezer for several years, it’s now well over 20 years old and still functioning. Well, it’s a bit rusty around the edges but it still works which is the main thing.

One of the reasons I’m reluctant to get rid of this fridge is because it reminds me of Ron. A loving, warm hearted man who needed someone to look after. He nursed all his wives, and when the last one died he was bereft. His life started to disintegrate after that, and he lost his sight.

But when I look at our fridge I think of the happy Ron, laughing in the flower scented garden on that warm summer’s evening as he knocked back the wine. That’s the Ron that I remember.
Posted by Flowerpot at 08:48

That is some fridge freezer fp. It's a pity they don't build things to last like that nowadays! And I can see why you don't want to get rid of it just yet. Things are never just objects are they? They always remind us of something.

thats very true RT - and I like things that remind me of someone or something.

Oooh don't mention fridges. Mine is 14 months old, 2 months out of warranty and has packed up. Am not a happy bunny.

AOJ - that's another reason why I'm putting off getting another one!

It looks a great fridge and mine badly needs defrosting, my kitchen cupboards need sorting and the cooker needs a good clean too. I used to do all those things until I started blogging.

What you need is one of those small steam cleaners, you know the type that you can steam wallpaper off with but it has a nozzle too. I don't think they're expensive. It defrosts the freezer in 1/2 hour - I know because I did mine last week. You just direct the steam at the top of the freezer and the ice just melts away. Put a bowl in the bottom of the freezer though to catch the water and you will have to keep mopping up but it's really quick and painless.

What you need is one of those small steam cleaners, you know the type that you can steam wallpaper off with but it has a nozzle too. I don't think they're expensive. It defrosts the freezer in 1/2 hour - I know because I did mine last week. You just direct the steam at the top of the freezer and the ice just melts away. Put a bowl in the bottom of the freezer though to catch the water and you will have to keep mopping up but it's really quick and painless.

ellee - that's not actually my fridge. But I agree about blogging!

ak - what an amazing invention. Sounds great! Dont suppose you have any idea where I can get one?

A steam clearner sounds an interesting idea!
Love the photo!

I usually use a hairdryer. FP. It doesn't take too long.

My washing machine has just packed up. Grrrrr.

Casdok - I think a steam cleaner is a brilliant idea!

Liz - he was a lovely man and is sorely missed by everyone.

MissU - unfortunately I dont own a hairdryer and never have. Sorry about your washing machine. My last one didnt last long - nothing else does now does it?

OOps I just noticed I posted my last comment twice!

If you have time to search you will find one to suit.

I used to used a hairdryer but it takes longer and it's very dangerous with water dripping on an electrical appliance!

Hope you get one it will make defrosting your fridge a lot easier and you can use it for all sorts of things.

thanks for that Ak!