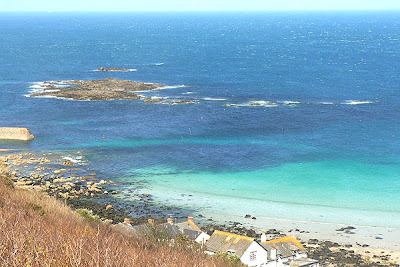 Yesterday we had a wonderful trip down to Sennen, which for those of you that don’t know, is near Land’s End. The landscape down there is very different from other parts of Cornwall. A couple of miles outside Penzance you drive over the brow of a hill and suddenly before you is miles and miles of moorland. Scrub and golden gorse, rough looking cattle and the odd sheep. Not a house in sight. You can almost feel how old this land is, and how many stories it can tell. It is magnificent and humbling.

The interview - with an enterprising couple in their early 60s who manage a camp site on the outskirts of St Just – went well, and afterwards we took our picnic down to Sennen Cove where we realised, sadly, dogs aren’t allowed in summer. So we set off on the coast road to St Ives, which must be one of the loveliest in the country, and arrived at Zennor, well known for its mermaid chair in the tiny church.

Himself ensconced himself in the Tinners Arms, Moll and I set forth along the coastal footpath. Despite the brisk wind, the sun was hot and we walked towards St Ives looking down on a sea which was a tapestry of different blues interwoven with the palest green. It was just perfick and I thought how lucky we are to live in such a beautiful place.

Arriving back at the pub about an hour later, we found Himself sitting outside with a dog that was Mollie’s almost exact twin. The pub dog, called Murphy, was a placid friendly creature that sniffed at our Moll and evidently decided that the food smells emanating from the kitchen were more interesting.

You’ll get a picture of the two scruffy dogs when technology allows. It’s on a go slow at the moment. The picture above is courtesy of the BBC.

Shelagh - we will definitely do this walk when you come over. Mark - we didnt have time for Treen but will fit that in when Shelagh's over!
Posted by Flowerpot at 12:03

It really is like another world down there, isn't it? It sounds like you had a wonderful time!

I'm being nosey and have tagged you if you would like to take it on?

Lady thinker - I will go adn take a look. Thanks!

I really need to visit that part of the world again. :)

The photo of the beach brings back fond memories. I look forward to hearing about your trip to Treen soon.
Cheers Mark x

mark - it really isa beautiful part of the world isn't it? I bet you miss it.

It sounds (and looks) so beautiful!
Looking forward to the Moll twin photo:-)

Lane - it's even better in the flesh, so to speak!

Ahhhhhhh! I do love Cornwall. Been to Land's End & St. Just & the Lizard.
Had some lovely times there in the past.
Beautiful place!