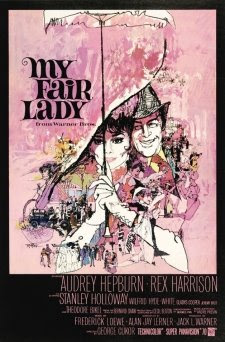 Last night Himself asked me what was the first piece of music that made an impression.

I had to rack my brains, because I didn’t come from a musical family. Nor did we sing at school. But then I remembered. It was a record of My Fair Lady – not the film version but the Broadway version with Rex Harrison and Julie Andrews. My uncle and aunt had been to see it in New York and brought the record back for my parents.

They didn’t play it much but I loved it. I used to stare at the cover, a mass of grandiose black and white swirls – from the Ascot scene I think – carefully finger the vinyl record, and play it over and over again.

I would dance round the living room as I learnt every line, every note and made up every step, because I couldn’t imagine singing without dancing.

Even now, all these years later, I’m still word perfect. So it shows the brain’s working somehow.

What’s your first musical memory?
Posted by Flowerpot at 10:21

1950, driving everyone potty singing over and over again a la Teresa Brewer:

Totty - I wasn't around in 1950 but I do remember the song very well. Thanks for that!

My strongest musical memory is Les Miserables. I still know the words to at least half the songs (a shame for ET who has to listen to me singing in the shower ;@) ). I've never been to see it, but I dream...

I've never seen it either RT but some of teh songs are great...

Well...moving away from musicals, my first memories are listening to Neil Diamond, Abba, Leo Sayer and Nilson at my parent's parties.

I loved Showaddywaddy and would play some of their songs over and over again in my bedroom. I was about 8 or 9 when they were popular. Great times!

MissU - I was a great fan of Leo Sayer and Neilson - I heard one of his the other day and it brought back happy memories!

Pat Boone singing "Love letters in the sand" which was a record my parents owned and I was a very little girl and I imagined him actually doing this and how hard it must have been.

Sweet Irene - What a lovely picture that conjures up!